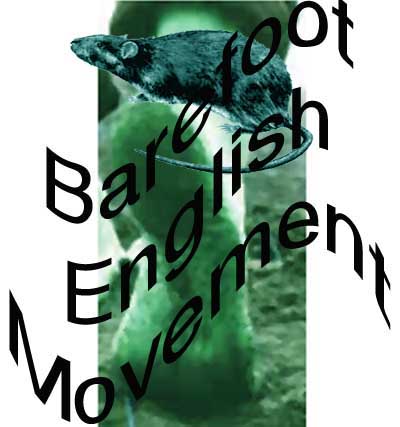 In the European Midleages there were a revolution. It was started by people speaking a muddy Latin, a sort of Barefoot Latin, a mixture out of Church Latin and other European languages, spoken mostly by Barefoot Philosophers and Magicans like Agrippa von Nettesheim and other. This was the beginning of a new society. It was a stroke into the Face of the church, the Pope and Imperialist Church Latin.
But the Bad and Ugly stopped this revolution by Nationbuilding and separated the European people. So revolution was stopped. Barefood Latin was killed by teachers, the dead Church Latin was reastablished by them.
Nowaday we live again in changing times. We should not do the same mistakes again. Don't belief your English teacher. They want us to speak BBC-English or to shut up. So English teachers all over the world try to silence the suppressed. They are the enemy, friends of an Imperialist English speaking correctnes. Don't belief them, don't trust them. Just take the English you need and use it without looking after Imperialist Grammar.

Let's steal English from the Imperialist.
Let's muddle it up with other languages, and with the singing, the whispering, shouting of the suppressed.
Let's throw their correct English into their white shiny faces.
Let's talk and write in our English, in Barefoot English, world wide.
Let's do the revolution.

- Why Barefoot English, an Answer of Ivan Illich - Vernacular Values