My submission to the 'OLDENBURG-REICHE PRIZE'. In 2004 the MARS PATENT's founders Claudia Reiche and Helene von Oldenburg agreed to underwrite a contest designed to prove that MARS PATENT's HRM_1.0n, the "High Reality Machine" works and to explain its principle functions.
The authors pledged a Grand Prize of two polished brass plates for the first scientist or artist whose solution is convincing to the MARS PATENT's Grand Jury.
"The Grinning Gravitation Cat" got the public award.

First I have to say something about my English, it's not so good, but this is an urgent alert, because there is this little sad Grinning Gravitation Cat*, in former times she was called Anna, just in the middle between Mars and Earth. And she needs help - she is so lonely -. So I write in English and hope people will understand me and help this cat.


You see the technique of the High Reality Machine is based on an old, long time hidden, notebook about cat-technology from Albert Einstein. It was found by the people working for the preparation of the Einstein-Year-2005 - 100 years Relativistic Theory -. But the people who found it didn't realize the importance of this text. They tried to hide it, fearing that it could lay blame on Albert for what he had done to his cat.
I got a first look at this papers some months ago and soon realized that this was the solution for transport of things and thoughts to High Reality.

But let us start at the beginning. When Albert was just 11 years old he had a little cat. This cat loved Albert more than everything in the world, but this was not reciprocated. Albert, only thinking about gravitation and such stuff, used the cat for his experiments. He was always fascinated by the cats' power to jump, and thought about how to use her abilities to manipulate the gravitational field. The cat just wanted to please him and did everything he wanted. So he tied her to a desk, shouting that she should jump now, but she couldn't. Then he tried out what would happen if he threw her out of the window; the cat survived and came back. There were a lot of other cruel experiments and after some years of cat-experiments Albert got this idea. He thought about what would happen, if he would feed the cat more and more and more and more ... , so that the cat would finally become heavier than the Earth. And he started to feed the cat more and more and more and more ... . The cat became really heavy but she didn't grow, and Einstein realized that the cat accordingly started to influence the gravitational field. First, this occurred only in his small room. He made some experiments with his pencil flying around. When the pencil came near the cat, it always made a curve. Albert was really happy about his invention. He never thought about the cat, the sad gravitation cat, who grinned every time when Albert was near, hoping to get a hug, but never got it.

With the help of his cat Einstein had become a famous physician. But in 1905 there were still some experiments left to be carried out. He started to feed the cat more than ever and the little sad Grinning Gravitation Cat ate up everything just to please Albert.
Then came the day when Albert ordered her to jump to the Moon or even to Mars. The cat didn't want this, because she loved Albert so much and feared never to see him again, and she pleaded to him not to force her to jump. But Albert did not listen, he didn't want to see her grief, he just thought about his experiments. So this little cat had to jump into the darkness of the universe, and she did what Albert said, because she loved him more than her life.
For Albert the experiment worked very well, the cat influenced the light on the way from Earth to Mars, this was the definite proof for his gravitation theory. Passing the cats' body, the light made a curve. This was the last proof he had needed. He published his gravitation theory and became more famous than ever. The cat he forgot soon.

Since then the cat still lives at the midway point from Earth to Mars, sad and grinning lonely, but still having the power to influence the gravitational field more than ever. She now is the heart of the High Reality Engine, it is her power that transports things and thoughts to High Reality, but she is ever so lonely. So if you use the HRM_1.0n for your own purpose, just don't forget to send something for her, maybe some flowers, a fish or a poem.

On starry nights without clouds you can see her just behind the moon grinning sadly down at the Earth, hoping that Albert will come some day and ask her to come back. She still doesn't know that he is dead. In her gravitational field time has no meaning. 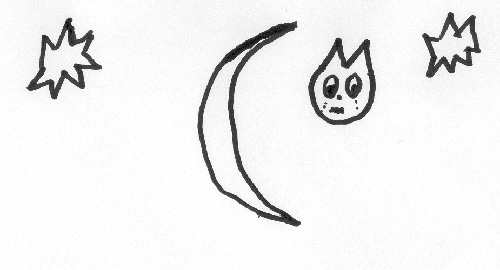 On the following pages you'll find an old picture of the young cat, whose name was Anna, one photocopied page from Alberts' secret notebook about cat-technology - you can prove that it is Alberts' handwriting -, and a letter the cat wrote some years ago, while flying through the dark lonely void. 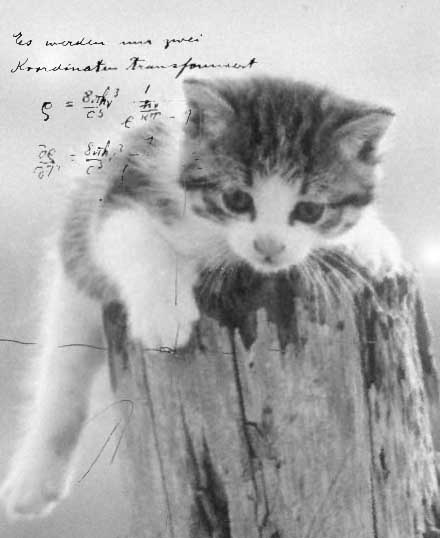 The young Grinning Gravitation Cat, called Anna, on a photo of an early cat-experiment (around 1892). Albert Einstein had written down some thoughts about his gravitation theory on this photo (around 1910). 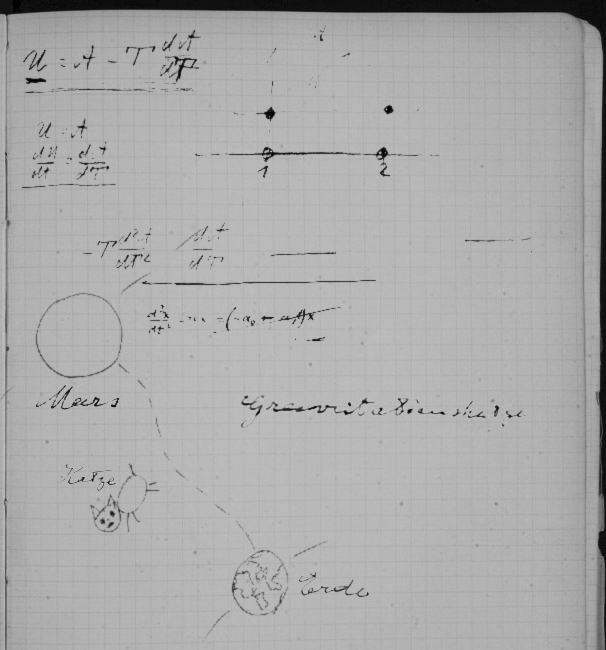 Original manuscript from the secret notebook of Albert Einstein about cat-technology. Albert writes in German. He writes "Gravitationskatze":

This is his original handwriting.


This letter by the Grinning Gravitation Cat, written on an old typewriter, was found in a meteorite which had fallen down to Earth in the area of Siberia. It was found by some Russian children some months ago; 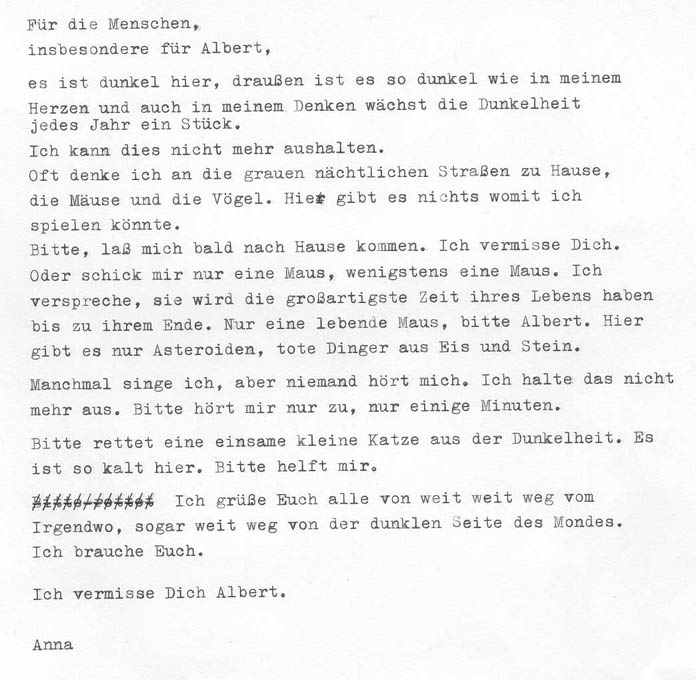 This original letter was in German. Here is a translation;

To the human beings, especially to Albert,

it is dark here, it is as dark outside as in my heart and the darkness within my thoughts is growing as well, more and more each year. I cannot stand it anymore. I'm often thinking about the grey nightly streets at home, about mice and birds. There's nothing here I could play with. Please, let me come home soon. I'm missing you. Or send me a mouse, just one mouse. I promise, she shall have the time of her life - till death. Only one living mouse, please, Albert. There are only asteroids here, dead matter of ice and stone

Sometimes I am singing, but nobody can hear me. I cannot stand this any more. Please, listen to me, only for a few minutes.

Please, save a little lonesome cat from the darkness. It is so very cold here. Please, help me.

I'm sending my regards to all of you from far far away, from somewhere that it is even far away from the dark side of moon. I need you.

* In German the Cheshire Cat is called Grinning Cat. (back)